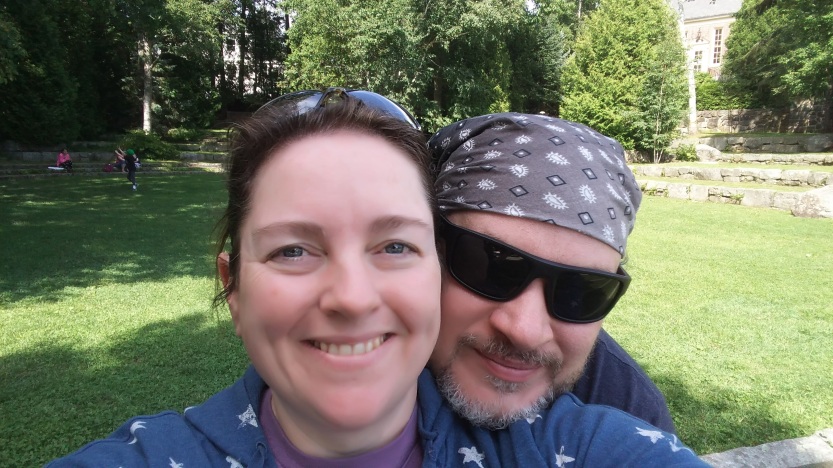 I’ve been extra busy since starting grad school. Now that a particularly tumultuous semester is finished, I’m hoping to get back to more fun writing. Tuesday the 31st will be my 19/29 anniversary with my hubby David. 29 years since our first official date, my senior prom, and 19 years since we married. This means as of this summer. We’ll have known each other for 30 years. That’s ¾ of our lives! I’m in school with people half my age, and they ask me about maintaining a long-term relationship, and I try to give some thoughts, but who knows if one piece of advice applies to another relationship. One thing I say is that we want the best for each other. We’ve both worked full-time while supporting the other through grad school. We’ve had to deal with moving, job loss, losing loved ones, my major illness, and almost dying. In short, we’ve had a lot of stress, but we always come back to wanting the best for both of us.

This year of school, our crazy schedules, and my desire to get the most out of this experience has meant he’s been on his own a lot, and that’s okay. He’s an adult and can entertain himself. When he was in grad school, it was the same way for me. However, we try to make time together. We both understand and know this is simply the way it is for now. All these photos are from this past year.

However, this hasn’t been only a tough time for me. It has been for him as well. My hubby ended up in the news twice within about a week this spring. One was the above snapshot someone took of him running in front of an Amazon truck engulfed in flames. He happened to be one of the first cars at a multiple fatality car crash during the morning commute. A couple of people happen to be there with some valuable skills. My hubby used his decades of management to help organize the scene. Once he got cars and people moved back from the fire and helped triage the scene, he waited with a man who had been thrown into his back seat and was unconscious. He talked to him until the first responders arrived. He called me to tell me what was going on, and then I started getting phone calls and texts asking me how he was doing. Word got out fast. After 4 hours, he was finally able to move his car, and he came home. While we ate lunch, I played YouTube videos of people reacting to Queen. I couldn’t think of something happier than people hearing Queen for the first time.

About a week later, he was interviewed about an employee in his store. You know what, I’ll let the article do the talking. Click here. David is kinda great.

This Spring Break, my mom and stepfather took us to Tennessee. We even took our photo with Dolly Parton’s statue as part of our Geocache. We’ve been trying to go to the Smokies since before COVID hit and we finally got there. We were standing (in the snow, mind you) on a peak of Ober in Gatlinburg, TN, and my hubby said to me, “This is the farthest west I’ve ever been.” In September, we’ll remedy that. Unless we all go into lockdown again or something awful like that, you know life.

In all this time, I think I’ve learned that it’s not about wanting the best for the other person, but for each other, and it’s not the same. We both must be taken care of, and it must be done with equity. He may not need the exact same thing as me, but it may be my turn today and his turn next week. It would be too off-balance any other way.

Neither of us is perfect as a person nor are we as a couple. It’s a lot of work. I swear you can track his comings and goings based on the trail of hats, mittens, and sweatshirts left behind. But that’s just part of who he is. In return, he must talk me into doing the cool things I work hard for and then get scared of when they happen. I don’t mind the working hard, but man, do I get freaked out when it works out. He’s there letting me know it’s a great thing and I should go for it.

Happy 19/29 Anniversary, babe! I’m always looking forward to what comes next with you by my side.

2 thoughts on “WOW! My Marriage Keeps Getting Older”