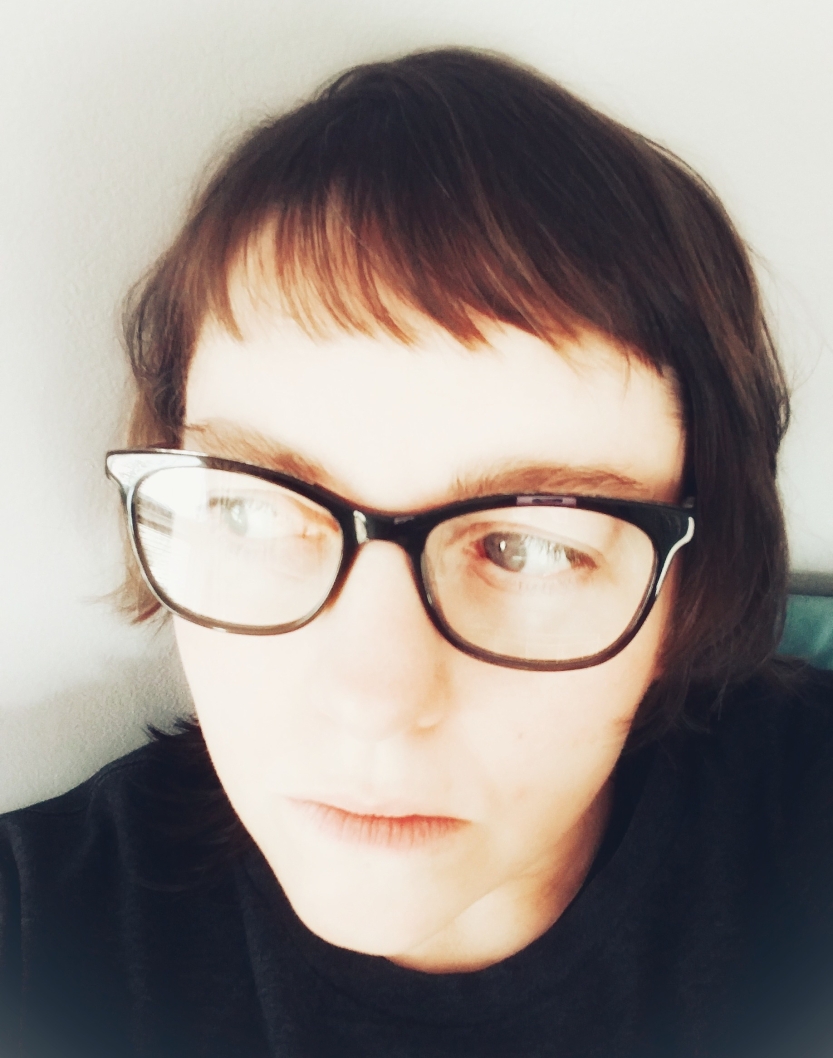 My eye doctor is a wizened eighty-something-year-old man with his own Lasik and cataract surgeries under his belt.  Dr. S still runs an active optometrist practice in the same small city in competition against his estranged older brother.  He looked at me with his more watery than twinkly scrunched up blue eyes and told me that my eyes were getting older.  He said I needed reading glasses, and even worse, my eyes were still good for someone my age.

He said if it weren’t for all the pesky reading and writing, I wouldn’t need them at all.  In essence, if I give it all up and become a couch tatter, I can put off glasses a few more years.  I’ll take the glasses.  It’s not like I’m tromboning it at a restaurant while trying to read a menu.  My insurance covered them, so I got cute black ones with silver filigree that runs along the tops.  They’re wicked mild.  I wanted a couple of pairs of cheaters, and I had to return a few before I got the correct low level.  Also, I found I needed full-on D lenses so I could read while in bed or lazing back on the sofa.  With my head tilted back on the pillow, I kept playing swervie McGee, trying to get the thin square frames to reach the bottom of the page.  Or I’d have to push them to the end of my nose and breathe through my mouth.

Reading glasses shouldn’t make me feel old.  The same thing happened when I was in college.  I never slept and read all the time.  Not only did I have my classwork, but also the independent project reading, and I still read for fun.  My eyes were just tired.  When I graduated, and there was less demand on my eyes, they relaxed.

So many people wear glasses, and now they come in stylish options, and I know it’s no big deal.  As a kid, I wanted to wear glasses.  Mostly because I had weird headaches and was told it was part of being a woman (thanks a lot).  I think I also wanted to wear them, so my outside matched my nerdy insides.  I’m amazed at how many people talk to me as if I’m unintelligent or that “someday” I’ll understand better. Deep down, I thought if I had glasses, it would end the condescension.  Not sure it would.  I guess now it’s the for your age and getting older stuff.  Anyone more aged than me is rolling their eyes, I’m sure, and it’s all part of reality.

When you’re writing about being over 40 and taking on something new, I suppose there would have to be a shift somewhere in me.  I thought it was getting out in the world after having it be so small for so long, using my voice more, getting outside of my comfort zone, no longer letting Netflix be a crutch as it was for the years I was sick.  It’s been hard working on all of those.  Not everyone around me has been excited or supportive of the changes in me.  I suppose I could view reading glasses the same as muscle soreness if I’d taken up running (I’ll stick to swimming), or if I’d just started hiking.  The body would have to switch and react.  I’m not sad, and I’m not that worried about it.  I was more disappointed that no one at work noticed when I started wearing them.  They all said, “You just seem like someone who wears glasses.”  See, my nerdy in visual form.  Life is change, change is not a bad thing, even if now I have to remember to wash them regularly, so I don’t end up with blurry spots from finger smudges, or to pack them in my bad when I leave the house.

Dispatches from the forest floor fern edition. These are combined from several hikes and locations. . . . #naturephotography #nature #plantphotography #plant #plantlife #ferns #fiddlehead #forest #florestfloor #woods #natureismychurch #coupleswhohike #botanical #botanicalphotography #hikersofinstagram #hike #hiking #hikingadventures #walkinthewoods #walkinginthewoods
Acorns bursting open and germinating on the side of the trail. Not something you see every day. . . . #naturephotography #nature #natureismychurch #plantphotography #plantlife #acorn #trees #hikersofinstagram #hiking #hikingadventures #coupleswhohike #adventures #walkinthewoods #walking #germination #spring #botanical #botany #botanicalphotography #vitamingreen #optoutside
Lupine is a favorite of mine. It has a special place my heart. Caught these beauties in bud. Hope to return to that trail while they're in bloom. . . . #flowerphotography #flowers #flowerstagram #lupine #naturephotography #natureismychurch #naturelovers #nature #coupleswhohike #missrumphius #albanypinebush @apbpc #hikersofinstagram #hike #walkinthewoods #walkinginthewoods #botanicals #botanicalphotography #outdoorlovers #outside #optoutside #hikingadventures #adventures
Some wetlands and ponds brimming with life. Look close over the water in the videos for the birds feeding and swooping. It was breathtaking to watch. I didn't want to get any closer in case I disturbed them. . . . #coupleswhohike #hikersofinstagram #hiking #hikingadventures #adventures #walkinthewoods #walkinginthewoods #woods #wetlands #water #waterways #pond #birds #outdoorlovers #outdoors #outside #optoutside #naturephotography #natureismychurch #naturelovers #nature #albanypinebushpreserve @apbpc
Bowie's taken up residence in my headspace and not mad at him. Under Pressure was the predominant anthem for a while, but I seem to be moving to Changes. What's your pandemic anthem? Or even your everyday soundtrack? My blog is up. christyflutterby.com or the link is in the bio. . . . #writingcommunityofinstagram #writerscommunityofig #writers #davidbowie #queen #nin #nineinchnails #rusticovertones #underpressure #changes #newnormal #normal #AWP @awpwriter #hippocamp #hippocampusmagazine @hippocampusmag #coldcomfortfarm #authorlife #authorssupportingauthors #writingconference
A break from the beauty of nature for a couple of goofy pics of us in it. That's @darqskies looking like a lurker behind me. There's one of him skipping stones. If there are rocks and water, he's gonna skip some stones. Yes, we bring face protection in the form of masks, buffs, and scarves when we cross paths with other people. . . . #coupleswhohike #date #dateideas #hikersofinstagram #hiking #hike #outdoorlovers #outside #outdoors #facemask #adventures #hikingadventures #walkinginthewoods #walkinthewoods #woods #forest #naturephotography #natureismychurch #naturelovers #nature