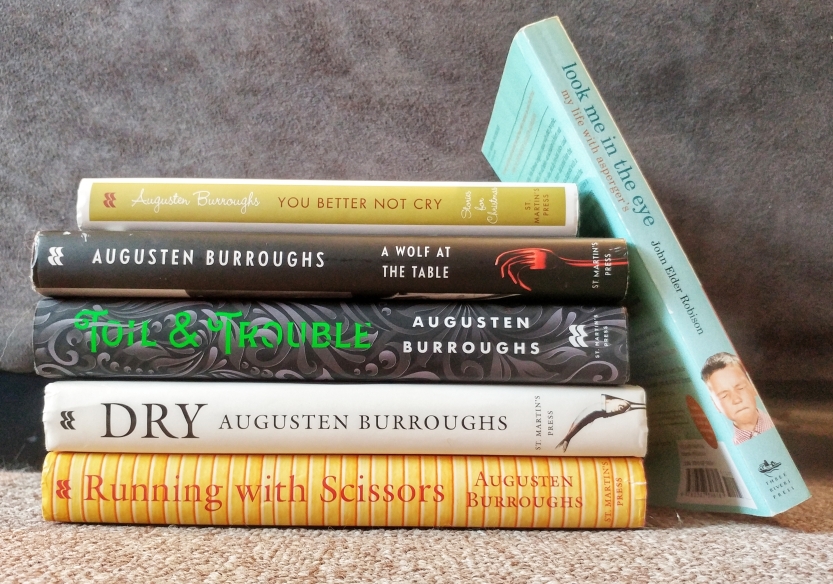 I am continuing my sharing of author Augusten Burroughs.  Last week, I focused on his craft and what I find compelling in how he approaches difficult topics.  This week it’s about my favorite of his ten books.  The effectiveness of his craft and voice is the bridge he builds between readers and issues that aren’t openly discussed or viewed as taboo.  Due to his compartmentalization of topics and the tough nature of his subjects, Burroughs books are great for my students, adult learners in incarceration.

Running with Scissors was his first memoir, and the topic piqued people’s interest.  It’s about his unusual childhood in Western Massachusetts and his mother giving him away to her psychiatrist.  In talking to people about this book, and other books like it, stories like this can be viewed as sensationalism or as tell-all.  I disagree.  Perhaps for those raised in more traditional circumstances, it might be hard to relate to these extreme stories, or they find it too uncomfortable.  It could be the fear of their own experiences coming out and being public.  There is a universality in how Augusten writes.  His openness and vulnerability can create both discomfort and comfort to find oneself somewhere inside of his work.  This is the book I recommend to my students when they think no one can understand their hard or unusual life.  I cannot tell them about my life, I need boundaries, but I can share this book and then give them books like Glass Castles to let them know they aren’t alone.

My personal favorite is You Better Not Cry: Stories for Christmas.  They’re stories of wanting a perfect traditional Christmas, but never achieving it.  I love Christmas, and at the same time, I don’t believe in that conventional idea of what Christmas is or should be.  Maybe a lot of us feel that way or National Lampoon’s Christmas Vacation wouldn’t be so popular.  Finding joy and hope in the middle of a mess is how we survive (look around this pandemic, there are glimmers of joy and hope everywhere).  The first time I read it was along with my sister in law, another Burroughs fan, and she texted asking if I’d read the chapter The Best and Only Everything.  My phone was covered in tears when I replied to her.  Even thinking of it causes my eyes to burn.  The story centers around love and AIDS.

I worked in reproductive justice and health education for twelve years before my current job.  I was co-chair of our local HIV/AIDS coalition.  My co-chair lived with HIV longer than it has had a name.  I shared the book with him one Christmas, and in his soft, quiet way, he thanked me for sharing such a powerful book, especially that chapter.  My dear friend passed away last winter, and I’m still grieving.  Sadness sits in my chest when I think of all the things I want to share with him and all the love he brought to other people’s lives.  He was diagnosed at a time when it was a death sentence.  He feared harming others so much that he stopped dating or allowing himself the thought of falling in love.  The fear and protective nature that Augusten shares for being in love with someone who was HIV positive was something my friend could relate with.  He, too, cried at the beauty of the writing in The Best and Only Everything.  It’s the most lyrical Burroughs becomes with his writing and is an excellent use of that style.  He places his heart in your hands.

A Wolf at the Table was the book I had been waiting for.  I appreciate all his writing, especially as someone who grew up in Western Mass, but this was the one I relate with the most.  Up until then, the father was a void or in the background, and at the same time was this looming figure.  My father evoked mixed feelings in people.  He, too, was a looming figure.  I can tell my version of him as a man and a father but survey my many siblings and his many wives, and they would each have their own stories.  We often don’t recognize him in other people’s tales.  It’s difficult to talk about a figure like that.  It’s the one I recommend to my students when they have a figure who’s challenging to talk about.  That one nobody else seems to believe or understand.

Dry, I think, is his most important book.  Several of my students are in recovery and need something beyond group, or the 12 Steps literature, or Chicken Soup type writing.  They often want someone who can share the ugly, smelly, dirty reality of addiction, but also provides humanity and hope.  I haven’t suffered from addiction myself but am surrounded by friends and family who have.  Stepping inside the world that Augusten is willing to share, helped me better understand what they might be going through.  There is so much reverence from the students who read Dry that one cried when he admitted he’d dropped the book, and the cover was a little ripped.  I had him watch me tape it and let him know it would be okay.

His most recent book is Toil & Trouble.  I loved it.  It wasn’t a book I was expecting and yet made perfect sense to me.  In this memoir, he talks about being a natural witch.  Don’t roll your eyes.  Growing up in Massachusetts, witches are not an odd concept.  He does a fascinating job of talking about his inherited gift, which bonds him with friends and family, but also to an angry old tree in his front yard.  This book will not convince you of witchcraft one way or the other.  It’s one man telling his story about something essential to the core of his soul.  No different than if he was telling you he’d been Methodist since birth.  The book is a bit magical (yup, I went there).  I have students I want to give this to, but it’s hardcover, so I’m not allowed.  I include the title in their exit packets.

I don’t follow when his books are coming out.  I let myself stumble upon them with giddy joy.  It’s as if the book knows just when I need it.  You don’t have to read everything the way I did.  I’m hooked.  My suggestion if you’re new to Augusten Burroughs or haven’t liked a book you read in the past, look through each of them individually and see if there’s a topic he’s written that speaks to you.

I’m also going to recommend the writings and The Moth stories of his brother John Elder Robinson.  John is on the spectrum and is open and willing to share his experience with the world.  Look Me in The Eye: My Life With Asperger’s helped me better understand how to relate with people who aren’t comfortable making eye contact.  His recent story in The Moth and his interview afterward was touching.

Here is a list of titles from Augusten Burroughs: